Co-hosted by the University of British Columbia Library and the Ohio University Libraries, the 5th WCILCOS International Conference of Institutes and Libraries for Chinese Overseas Studies on Chinese through the Americas was successfully held May 16th to 19th, 2012 at the University of British Columbia (Point Grey Campus) in Vancouver, Canada. Over 200 scholars, librarians, community researchers and students from 13 countries and regions attended the 28 panels discussions. 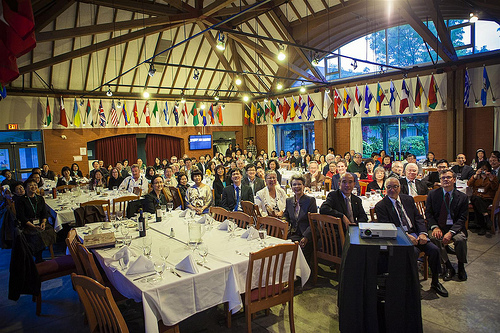 It is fitting that Vancouver, Canada to be the venue for the 5th WCILCOS conference as this beautiful city has been a hub of transnational flows of Chinese migrants since the 18th century. As the host institution, the UBC Asian Library is prestigiously placed and equipped to orchestrate the upcoming conference. The return of the WCILCOS Conference to North America also serves to recognize the rapid expansion of Chinese overseas studies and its related fields in the region. As with previous WCILCOS conferences, the organizers hope to utilize this event to promote the nexus between research and documentation on Chinese overseas studies and to facilitate greater interaction between scholars and librarians around the world.

The 6th WCILCOS Conference will be held in 2014 at the Xiamen University in Fujian, China.  For future news please visit https://overseaschineseconfederation.wordpress.com/.